Rangers manager Giovanni van Bronckhorst insists he has no intention of changing his footballing philosophy because of back-to-back 4-0 defeats.

The Ibrox side have been criticised after a poor performance against Celtic saw them slip five points behind in the Scottish Premiership title race.

They then followed that up with defeat to Ajax in their opening Champions League match in Amsterdam.

But ahead of Wednesday’s match against Napoli, Giovanni van Bronckhorst insisted there is no need for wholesale changes.

“Two weeks ago we qualified for the Champions League and everything was fine, everyone was praised,” said the Dutchman.

“Two defeats later it looks like we haven’t performed in the last couple of years. That’s the dynamic of football.

“I’m not changing anything about my philosophy, about how I want to play, although of course there is a lot of room for improvement.

“The level we’re facing now in the last couple of months we have never endured in the last 12 years, so of course it’s going to be tough.

“I don’t understand why we have to put our philosophy on the side.

“We can go to Ajax and play with 10 defenders and try to keep the zero but we’re not improving as a team like that. The big learning point is to do it differently against another quality team.”

Allan McGregor will start in goal against Napoli after Jon McLaughlin picked up an injury in the defeat to Ajax.

The 40-year-old has only featured in one match this season, against Queen of the South in the Premier Sports Cup, but Van Bronckhorst has no concerns about him returning against the Serie A leaders.

“Jon is not available. He picked up an injury after the last game so he will not be involved,” said the Gers boss.

“He’s still the same in training, he’s the same person and I have every faith in him when he plays because of the experience he has.

“I don’t have any doubts that he will perform.” 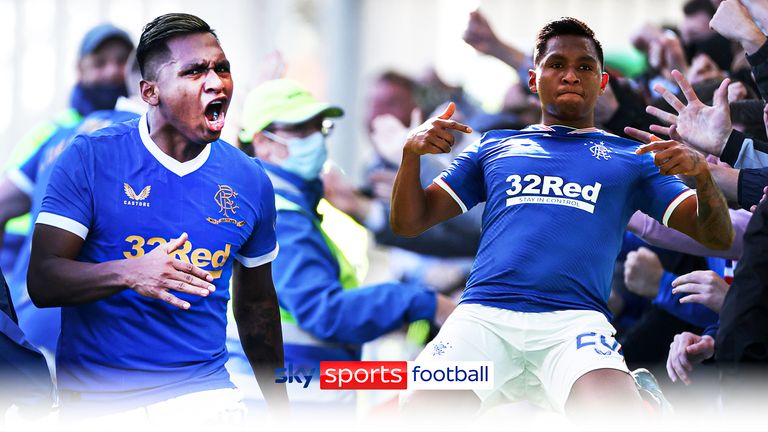 Van Bronckhorst admits Alfredo Morelos has given him a decision to make after his change in attitude.

The striker was dropped from the squad following various concerns, including his fitness levels and attitude over the early stages of this season.

He was on the bench last week in Amsterdam and the manager has been impressed with how he handled the punishment.

“He’s definitely better than he was a couple of weeks ago, both physically and mentally,” said Van Bronckhorst.

“He’s training really well and I had a good conversation with him.

“Not being involved against PSV was a big wake-up call.

“After that he’s been doing really well and he’s in a far better place than he was in the last couple of weeks and he makes it difficult for me now to decide who to start with.”

Captain James Tavernier returns for Wednesday night’s sell-out match against Napoli after he was forced off at half-time against Ajax with an injury.

Davis: We’re determined to prove how good we are

Rangers midfielder Steven Davis insists the team are ready to raise their game after back-to-back defeats:

“The group’s been hurting. We expect better from ourselves.

“Unfortunately in football you do have setbacks, it’s important we respond and that starts Wednesday night.

“We understand the level the Champions League is and Napoli have had a good start to the season, magnified by the result against Liverpool.

“We know we’re going to have to be at our very best at this level to get things from the game, but we also know with the crowd here we can create something really special and that’s what our mindset is on.

“We had a disappointing game week one and the home games are always going to be important for us. It’s an opportunity for us and we’re excited for the challenge.

“We know the scrutiny we’re under playing for this club and the last two results haven’t been acceptable.

“The most important thing is getting back to the basics and doing them well, If we do that we can be a good team and we can hurt teams.”